Google Search Console got a much-needed facelift that has slowly rolled out to users recently. The old format is still available for users, but the inevitable will happen where everyone is forced to use the updated platform.

The platform is still a work in progress, and Google says some of the reports haven’t been migrated over yet, and some of those reports will be in a different form. But that didn’t stop me from starting to analyze the updated platform. Here’s what’s good and bad about the new version:

The biggest change that most SEOs are likely excited about is more historical data, up to 16 months of data to be exact. Previously, data only went back 90-days, limiting your comparisons. Now, you can compare to the previous year, which is extremely beneficial for season industries. There are a variety of options to compare data from, with a custom option as well. 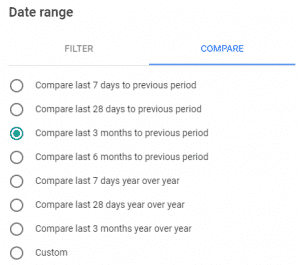 Index Coverage combines the major metrics from the Google Index & Crawl tabs of the old Search Console. Additionally, impressions can be compared to the number of pages you have indexed or 404 errors (Sorry, not a great example since we don’t have any errors.) A plus to the Index Coverage section is that Google provides some explanation as to why Google isn’t indexing certain pages of your site too.

For websites that list job posts, the new report will be extremely beneficial. It will require you to use job posting markup though. This helps Google both track your data for you and also provides them with an organized was to show postings in their search results.

In the previous format, the number of clicks and impressions were ‘exact’ while the numbers are now rounded. The change isn’t major, like losing data for keywords in Google Analytics years ago, but it doesn’t give you as accurate of a depiction of any fluctuations.

Considering that is my only complaint, you have to think that Google is heading in the right direction with the updated version. I’m looking forward to the continued improvements as Google finalizes the tool.