If you search for local businesses on a regular basis like I do, you’ve certainly noticed that Google updated Google Maps to a new layout. The biggest changes involved eliminating the side menu bar that contained reviews, photos and descriptions, and putting much of that information in the Maps results. It will also display additional information like hours of operation, photos and street view within a click away. The new layout also has the ability to be more compatible with other Google products, and it seems to encourage more user interaction by making it easier to leave reviews, upload photos, and to star or save locations to allow Google to show you more personalized results in new locations based on what you like.

I certainly applaud Google for trying to take the right steps for making Google Maps a better product, and I don’t think there’s anything wrong with the new layout. However, the resounding consensus is that the new Google Maps is painfully slow.

So if you’re like me, and would like to continue to use the old Google Maps while the Google team works out the kinks, here’s how you can do that.

In the bottom right corner of the screen, there should be a question mark symbol. 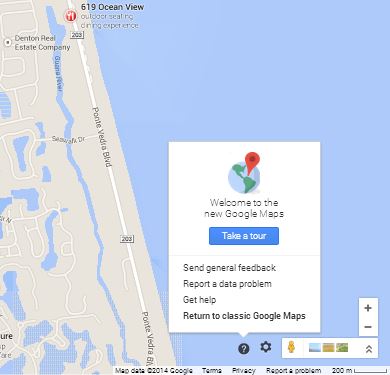 Google has intentionally made it a bit tricky for their users to ditch the new Google Maps layout without trying it out for a bit. I would assume that the new layout will be here to stay, and once the speed issue becomes resolved, users will find it acceptable to use and perhaps even more useful than the old Google Maps. However, if you’ve made it here, you’ve likely tried out the new layout, became frustrated with it, and now you are ready to go back to simpler (and faster) times.

UPDATE: Instead of asking if you want to make your choice permanent, Google uses the wording “You have switched back to classic Google Maps for this session. Remember this choice for next time?” It looks like they don’t have any intention of making the older version of Google Maps permanent for its users. In fairness, speed has gotten better for me since I wrote this post, but it’s still not that great and has been inconsistent for me. A little hypocritical don’t ya think Google?

Michael Hall is an Account Manager at Netvantage Marketing, which specializes in SEO, PPC and social media. Mike also runs our Denver office.