Back then, if someone had a bad experience with a company, what happened? They could stop purchasing from the company and pass on negative comments to friends. They could inform the BBB. If an issue was big enough, perhaps the media heard about it. However, all those things take time and most comments may not reach a broad audience. If someone was busy or felt powerless in the face of a business, it might have been easier to just give up and move on.

In today’s digital world, even the most seemingly miniscule customer has power. The internet gives them a voice, and information can be spread to thousands in a matter of seconds by hitting a few keys and clicking “Enter” on a social media platform. There are Google Reviews, online communities, blogs, and other outlets flooded with people who are understanding and supportive. All of these avenues can be found by a basic Google search.

So what’s the overarching theme here? Be careful who you make angry.

I recently came across a story on Jalopnik about a gentleman named Nishboo who won an eBay auction for a BMW X6 he wanted to give to his mother for her birthday. To make a long story short, the dealership declined his deposit and ended up selling the car to a local buyer a couple days later for more money – even after Nishboo told them it was against eBay’s policies to do so.

Angry and frustrated, Nishboo turned to a forum where members gave him advice, and, more importantly, began calling the dealership and flooding their Facebook and Google Reviews with negative posts. 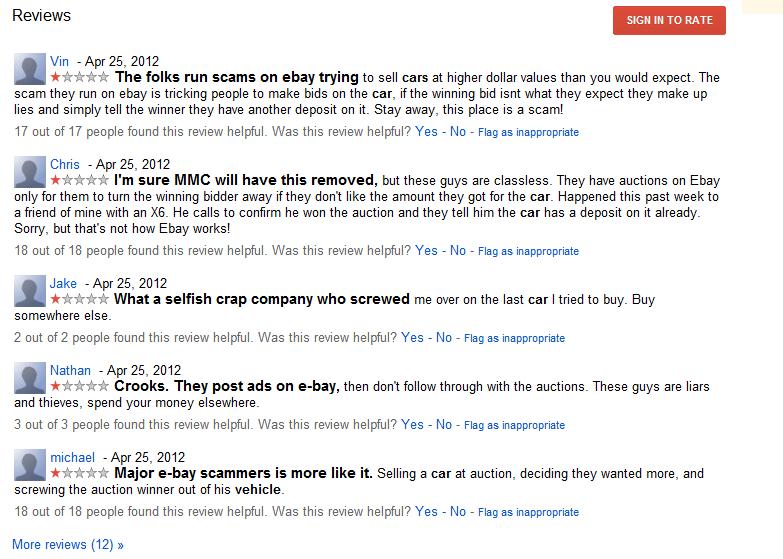 This doesn’t make Major Motor Cars look too good, especially to a curious person who may be interested in their company. If a basic Google search is done, the company page and rating is the first result. Someone may think ”Why only 2.5/5 stars?” and read the negative reviews.

If someone is especially curious, they may do a news search of the company. Google even has filters to allow a person to search for content posted on specific dates. In cases such as this, the range can be restricted to dates surrounding when bad reviews are posted. Since this is a newer story, it showed right up when I did a news search:

The headline does no good for the business, either.

This reminds me of a similar story from a while ago on 27b/6 about a sporting goods store that allegedly treated David Thorne, the owner of 27b/6, with disrespect when he attempted to return a pair of defective gloves. Although Thorne is a fratirist and thus known to stretch the truth, the post still evoked a variety of responses from fans and followers.

While there used to be over 100 reviews, most of which were negative, the bank has since been cleaned out. Some posts still remain, however:

Although the company did the right thing by replying and offering an explanation, they waited quite a while to do so. Thorne has claimed he was treated rudely, but regardless it just goes to show that employees need to be careful of how they speak to all customers.

On another note, negative reviews still remain on Yelp for Function 4 Sports. 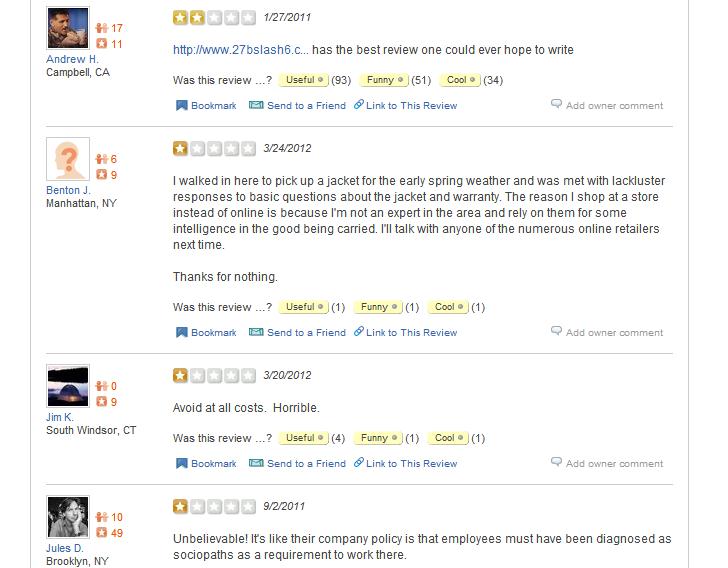 Ultimately, when looking for a service or product these days, it’s easy to go online, do a Google search, and look at the company website. Furthermore, there are plenty of outlets to investigate what other people are saying about it. Businesses thrive because of a number of these outlets such as forums with dedicated customers, recommendations, and reviews.

As a final note, businesses need to be careful when dealing with each and every customer and have a damage control plan ready. Although it helps to be a consumer with a large following in the case of a dispute, the power of a sole person with internet access cannot be underestimated.

Alyssa Zandi is an Online Marketing Intern for Netvantage Marketing, where she spends the bulk of her time working with social media, writing blogs and articles, and assisting with other SEO-related tasks. Connect with her on Google+ or Twitter.