First things first, I suppose I need to admit to being skeptical of Google’s social media endeavors. In fact, my Facebook statuses subtly bashed the search giant for attempting to reach out into all corners of the Internet. Google Weddings and Widgets and what-the-heck-is-that? Oh my! I requested a branded energy drink from Google to ensure that we could all keep up with their fast-paced roll-outs. That only seemed fair.

So, you’ll imagine my dismay when I logged on, took a look around, and had to pat good old Googs on the back for what appeared to be an admirable attempt at taking on the formidable Facebook. Obviously, as an early adopter, my biggest complaint was that it was empty. I felt like there were crickets chirping loudly as I browsed my “Stream”. Where is everybody? Echo, echo, echo. Now that we are a week-ish into the Google+ trial, Google invites are back up and running and Google has secured nearly 10 million users (according to Mashable), my stream is full of fishies. However, it is still just a stream– by no means can it compete with my ocean-like, shark-infested Facebook feed (I feel as though I should mention Twitter fail whales here as well to keep the body of water theme alive).

Right off the bat, there are a few things that you cannot deny about Google+. The interface is the cleanest out there and it is a huge step up from some of Google’s drably designed interfaces (Did you ever see the old Google Affiliate Network platform? Ew.) Although some of Google+ features certainly leave much to desire, it still has miles on Google’s previous attempts at social networking platforms. Also, you cannot deny the striking similarity between Facebook and Google+. In this way, many are going to stop and ask why they should basically replicate their Facebook profile over on Google+. We have lives too, Google.

Overall, I’m not entirely convinced that I am on board with Google’s vigor for all things social, but there are some things that Google did right…and some that seem to be way off. I took my opinions, some of my coworkers’ and friends’ two cents, and compiled this list of The Ew’s and The Awesome. We’re sure that this is just a preview of the splendor that will come from the Googs, but here is the initial rundown on Google+.

We’ll give you the bad news first. 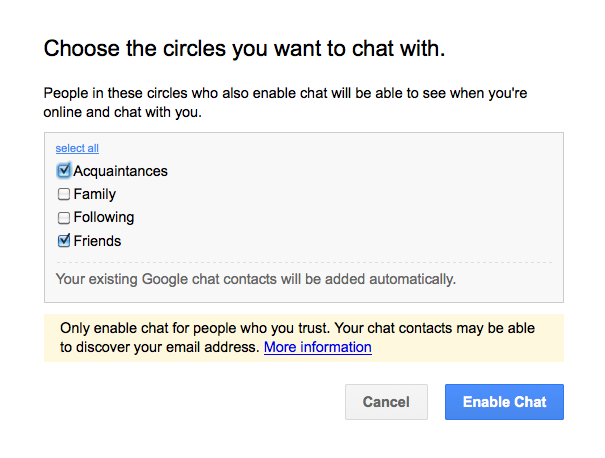 Google+ automatically adds your Gmail chat contacts to your Google+ chat list, many of which are people that I have exchanged work e-mails with on one occasion and have no desire to chit-chat with on Google+. There doesn’t seem to be an ideal way to edit this at the time being, short of editing your Gmail contacts. I, for one, do not have time to sift through it all. I suppose this wouldn’t be much of an issue if your gmail account is for personal use only, but there should be a better fix for those of us who use Gmail for a whole host of activities.

2. No feature to consolidate Contacts

I had hoped that Google would come up with a better way of managing duplicate contacts, but alas, thus far, we are on our own. If you have various e-mail addresses for the same contact, Google won’t be any help in consolidating your information. Instead, you are tasked with heading over to Gmail to fix these issues. Hopefully Google will come up with a way to remedy this soon because it makes searching for people more difficult.

We have a couple complaints on this one. First, Google automatically imports albums from Blogger and Picasa. Although it won’t make them public until you share them, the photos I post to my blogger account are random and aren’t well-suited for my personal profile.

Also, the platform is just kind of off. Perhaps it is because we are so in love with Facebook’s photo sharing features that we find Google Photos to be odd and inconvenient, but whatever the case may be, the Photo tab on Google+ isn’t organized to our liking. The Photos tab generates profile pictures from friends within your various circles, which is just not what we are used to. It also includes too much information about the various photos. I don’t necessarily want my circles to know what the picture was originally saved as or when it was taken until I explicitly add this information to a picture.

We understand the concept of Google Circles, but for now, the interface is kind of chunky and weird to operate. Contacts are way too large and the whole “drop a contact” thing is kind of tedious. Also, the problem of duplicate contacts can also be found again here as you try and find specific people. Circles will need an overhaul in the end, as we will need other ways to sort friends besides the larger social groups you initially place them in, last name, first name, and recently updated. Facebook’s ability to search by many different options definitely prevails here.

Google+ did do some stuff right or at least introduced a couple new things that you won’t see on Facebook.

Google offers up a few things we haven’t seen before on a social network in their posting options. Google allows you to edit posts, disable comments, or disable resharing on your own posts. If you are being inundated by notifications on a post that you commented on, you also have the option to “mute” that post to stop receiving notifications. Pretty nifty. 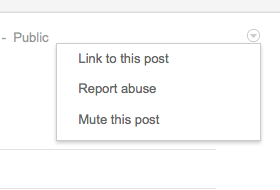 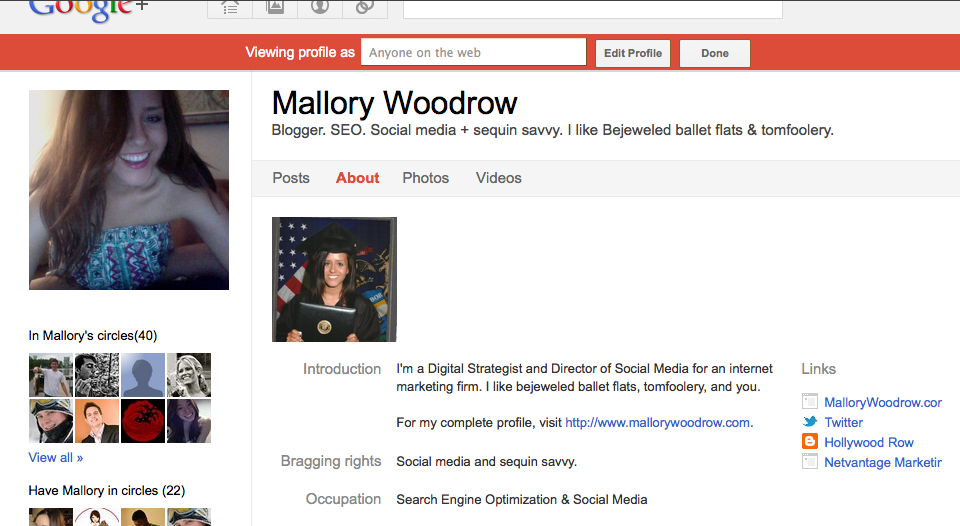 Google has somehow located the sweet spot that lies between the “Holy glittery .Gif” that is Myspace and the same old stuff we see on Facebook. The result the customizable profile pages seen above. The tag line allows you to add your own personal touch to your profile, yet it isn’t bogged down by too much information or too many customization options. Also, it looks pretty cool in SERPs– sort of acting like your own digital business card when you Google your own name.

Just like Google Profiles, the links you include in your Introduction section remain DoFollow links.

Google’s Hangouts is neat. Very neat. We’ve seen people use it for webinars, to have impromptu dance parties, host game shows, and to catch up with family in the short period of time that it has been live. We’re sure people will find other creative uses for this. The integration with Youtube is pretty awesome as well.

Overall, we are pretty sure that this is just the beginning of Google’s plight to become a social media mecca, but it isn’t a bad start. We still can’t be asked to predict whether or not people will accept Google as a social media contender or if people will tire of being tasked with updating one too many social media outlets. Only time will tell.

Share your thoughts on Google+. Complaints? Compliments? Still not on Google+? Head on over to our Facebook page to snag an invite.

Nice post. I had a few thoughts on G+ also.

Google Plus isn’t really a new social network – it simply links together all the existing google tools and makes them all better. Google already has every component of facebook (and most are better) now google is just tying all them together.

The most important thing here has absolutely nothing to do with features… it’s all advertising. Google makes almost all of their money on advertising because they catch buyers at the critical moment when they are searching for a product. (adwords) However, google has never been a good place for targeting advertising based on “role” or “interest”. Brand Advertisers need to be able to target users based on these interests to reach a market that doesn’t yet know they want the product. (IE: Branding) This is something that Facebook advertising does REALLY well. Google is threatened by this.

Now with Google Plus, users are going to willing volunteer vast amounts of additional information to Google. Google will then turn around and sell to marketers the ability to target advertising based on specific data including interests, race, location, friends, likes, dislikes, viewing habits, hobbies, gender, religion, photos, videos, birthday, marital status, website history and many more characteristics.

By designing google plus to be a loosely coupled set of tools that already exist – and google plus being build into the Google homepage – I think it’s a pretty smart strategic play. But it’s all about advertising.

If Google wants to attract users, they are going to have to supply the right features or else this advertising model has no value.

Allie, It’s as if you didn’t even read the post.

Travis, I agree with your take on their overall strategy. Obviously, making money is at the heart of this.

Allie, congrats on the new job! Big Fuel is lucky to have you. I also agree with some of what you are saying. Google will be tasked with making sure that people will want to volunteer the information Google needs in order to target their advertising effectively. Thus far, it looks like they’re not doing so poorly. 10 million users in a week? Not so bad.

We’re sure people will find other creative uses for this. The integration with Youtube is pretty awesome as well.
___________
Mary