When Google launched Google instant last month there was quite a hubbub in the industry.  People openly wondered if the search landscape was about to be permanently altered and what it would mean for those of us who spend our day manipulating the industry’s biggest player.  Most commonly, people assumed that long tail searches would suffer, as people would often be able to find a suitable result more quickly.

In our office one of my employees asked me directly, “What do you think of Google Instant?”

I hemmed and hawed and eventually just said, “I don’t know how it will impact things.”  The more I tried to dig into the mind of a searcher, the fewer answers I had.  If you’re typing in a search do you really have time to set your eyes on the results and make sense of them while you type?  If yes, the long tail of search would undoubtedly take a hit.  Would a searcher be more inclined to add small tweaks to their searches to see if they could improve their results?  If so, the long tail would probably receive a boost.

In the weeks after launch several bloggers posted their data on search results and to the surprise of many the long tail often saw an increase in traffic.

If you’re interested in some other, and more detailed posts on the general topic, I’d suggest:

I wasn’t all that surprised, as my initial hem response (prior to the hawing) was that the instant gratification factor would encourage people to add onto their searches.  Now whether or not that’s the impetus is beyond me, but it’s my working hypothesis.

One thing that I haven’t seen tackled yet in any research (as far as I’ve seen) is how Instant has affected B2B searches compared to B2C.  With a decent cache of clients who have sites on each side, I thought it would be fun (wow, this makes me a tremendous nerd, doesn’t it?) to see if there were any significant differences between the B2C and B2B word counts in search.  This is by no means at the massive scale of data that others tackling this topic have used, but for those wondering the combined data here represents 94,848 searches from the month before and after Google Instant’s launch on September 8.  Post-data represents searches in the month following Instant’s launch while Pre represents the month prior. 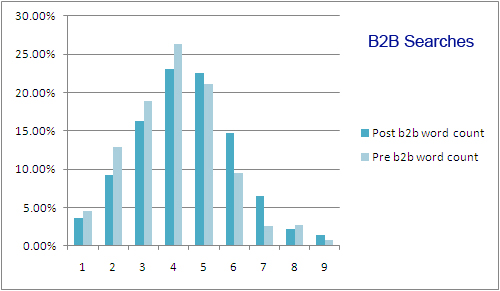 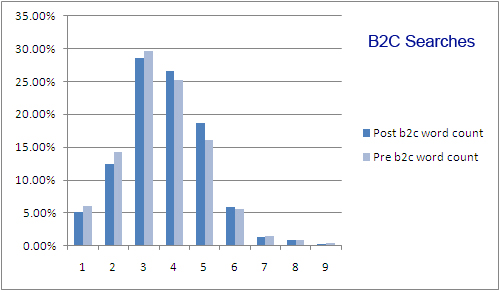 Both graphs fall generally in line with previous research if you just stand back and look at the bell curve.  However, there are some subtle differences here that I think are worth looking into.

As the good folks at Distilled pointed out in a much larger sample, Google Instant does seem to be ramping up searches further down the long tail (their research noted at a query length of 7 words getting the biggest spike), but here we only see that on the B2B side of things.  In our sample, product oriented searches seem to generally have shifted from 2-3 word queries to 4-5, whereas the B2B queries moved from 2-4 words to 5-7.

I would likely attribute this to the more nebulous nature of services versus products.  Tangible goods are likely easier to describe in fewer words compared to your typical service based B2B query.  So my takeaway here would be to focus on the long tail more than ever if you’re living in the B2B world, particularly the extreme long tail (they convert, they really do!).  If you’re living in the B2C world, there may be increased opportunity further down the long tail, so if you’re doing well in the 2-3 word queries, you may want to make some on page adjustments to open up increasing opportunities further down the long tail.

If you want some additional reading on the long tail, might I suggest:

Netvantage Marketing is a search engine marketing company founded in 2008. We assist businesses in a variety of industries with search engine optimization and paid search management.